The next 9-10 days is going to be absolutely crucial in the Brexit saga. Astrologically, this period is marked by Venus contacts to astrological heavyweights Saturn and Pluto, as well as a Scorpio New Moon AND the start of Mercury retrograde on October the 31st....Wow!

Can astrology provide us with some useful insights into the character of this enigmatic woman? On Wednesday the 13th of July, a day after Venus enters the sign par excellence of world leaders and kings: majestic and proud Leo - emblem of Britain since the 12th century  - Theresa May will become the second woman ever to hold… END_OF_DOCUMENT_TOKEN_TO_BE_REPLACED 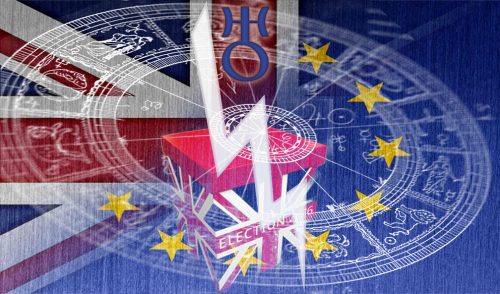 On Friday the 24th of June 2016, many Brits woke up to the shock of their life - the EU Referendum poll had yielded a voting result no one had expected - the Brexit camp had won by a margin of 4%. As the reality began to sink in, Leave voters began to celebrate, whilst elsewhere, there… END_OF_DOCUMENT_TOKEN_TO_BE_REPLACED

In less than 10 days, the UK population will go the polls to decide whether or not they want to be a part of the European Union or not. This is a fairly landmark vote, and one that has massive implications, not only for the fate of Britain, but also potentially for the rest of… END_OF_DOCUMENT_TOKEN_TO_BE_REPLACED

Obama Second Inauguration January saw the second inauguration of President Obama on the 20th and 21st of the month.  The ceremonies took place just as the Sun left conservative Capricorn (representative of the Republicans) and ingressed into progressive, egalitarian Aquarius (associated with Democratic values).  Aquarius also happens to be rising in Obama’s natal chart, so he, the Democrats and the times… END_OF_DOCUMENT_TOKEN_TO_BE_REPLACED

Cardinal T-squares and emotional crises, extremism, protests and speeches At the end of September, many of us found ourselves embroiled in emotional dramas, crises of conscience and calls for change as the Full Moon in Aries on the 30th made a conjunction to Uranus. As well as creating a polarising schism between our heads and our… END_OF_DOCUMENT_TOKEN_TO_BE_REPLACED

Death of a North Korean Dictator December 2011 saw the death of North Korean dictator, Kim Jong-il. Although his passing away was officially announced on the 17th of December, no one is sure of the exact time or date of his death, nor indeed, of his birth, given this controlling regime’s penchant for secrecy and their preference for mythologizing the life of their ‘dear leader’ in… END_OF_DOCUMENT_TOKEN_TO_BE_REPLACED

With plenty of contacts between Venus and Mercury, October was an eventful month, especially for legal decisions. We had the headline-grabbing acquittal of Amanda Knox, jailed for the murder of Meredith Kercher, after her appeal hearing in Italy. This occurred when both were part of a stellium of planets in Libra, sign of justice and the law. Later with Venus and Mercury having ingressed into vindictive, sometimes vengeful Scorpio, from where they opposed the Moon and Jupiter, politician, Liam Fox, was forced to resign amidst scandalous rumours about his association with Adam Werritty.  A… END_OF_DOCUMENT_TOKEN_TO_BE_REPLACED

No sooner had the phone hacking scandal dissipated then the UK was hit by global stock market volatility with European and American shares falling to record lows in the wake of uncertainty about US and Italian national debts at the start of August. A few days later, a number of flashmobs and riots broke out, starting in Tottenham, London on the 6th, soon spreading across the UK the following week, accompanied by wholesale looting of certain high street shops . At the time, Pluto and Uranus in cardinal signs came within… END_OF_DOCUMENT_TOKEN_TO_BE_REPLACED

At the very beginning of May, the world was startled by the announcement that Osama Bin Laden had been killed during a covert operation by US military forces in Pakistan.  Jubilation by the American people soon turned to doubt and cynicism as it emerged that they had buried his body out at sea. Despite repeated calls for proof,  the US government refused to publish photographs of the corpse, leaving many wondering whether it was really true that this long-sought fugitive had indeed been caught and killed.… END_OF_DOCUMENT_TOKEN_TO_BE_REPLACED