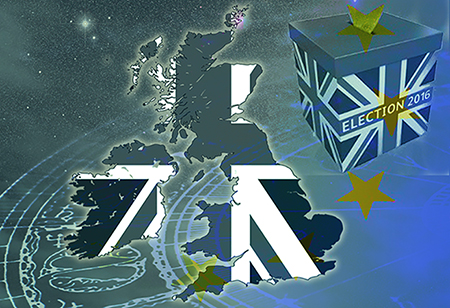 A lot can happen in two years, and my goodness, there have been so many twists in this particular tale since that historic (and controversial) vote back in June 2016.

In the last week, though, things have seriously ramped up, both for the UK and its current prime minister, as the March 31 deadline rapidly looms. Tonight at 7pm, the House of Commons is due to cast its final vote on Theresa May’s Brexit Deal.

It’s make or break time for the UK in so many ways. Many see today as a pivotal moment – not just in terms of the UK’s relationship Europe, but if many experts are to be believed, for the future of UK politics, the makeup of its current political parties, the career of it’s current prime minister…and and – potentially – also the current shape of the UK itself.

Given how historic and important this moment stands to be (and how it could affect not just me but many people I know), I thought it time to have a look at the astrology to assess what’s likely to happen next. 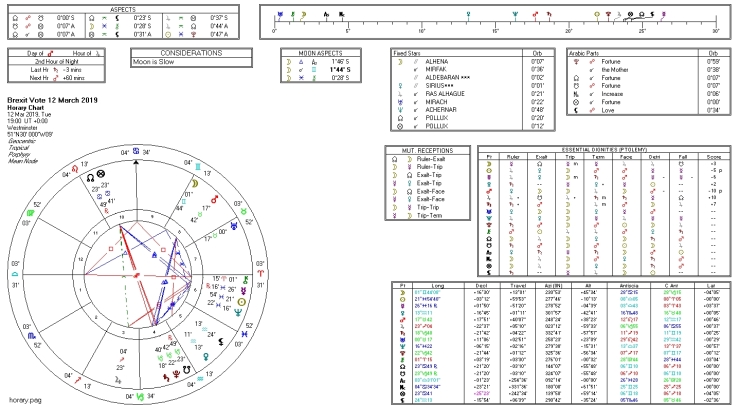 What a time to be voting on such a monumental piece of legislation! Not only is Mercury  (ruler of negotiations and political retrograde AND in fall, but

So if we treat tonight’s vote as our starting point, and read it like a horary chart, then the following things emerge:

Many of the most powerful supporters of the Brexit campaign appear in the Paradise Papers because of their offshore interests. There is nothing illegal about their arrangements.

But many of these same voices have urged a “hard Brexit” – which could see the UK ripping up its economic model and in effect becoming a tax haven on the borders of Europe.

It is interesting that if we revisit the 2016 Referendum chart, we find one of the key markers for a pro-Brexit vote  – Uranus, the cutting planet – in the 8th house of taxation, so perhaps this played a bigger factor in pro-Brexit Tory and banking circles than we realized at the time? It may also be why the City seemed to keep fairly quiet throughout this whole Brexit process, despite the fact that the City of London potentially stood to lose its financial passporting rights as a result of Brexit….It does seem quite signficant that Saturn and Pluto are opposing the North Node and Part of Fortune in Cancer (10th). In other words, the interests of the few stand in direct opposition to the wealth, good fortune and destiny of the UK as a whole.

Of course, we could waffle on and on but we need to cut to the chase – what is the likely outcome of the election?

For that, we need to consider the aspects of the Sun and Moon in relation to the signficators we have identified for the various parties and factions.

The Moon, however, in horary charts, is usually the clincher. So, what does it do?

However, this may not be the end of the story.