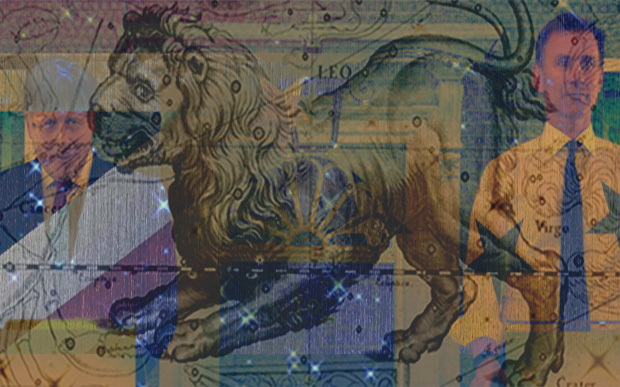 He’s not even in office yet and already the rebellion against his possible premiership has started. With voting now official closed, will Boris Johnson will finally realize his dream of becoming Prime Minister? What does this mean for Brexit? And more, importantly, with several ministers resigning/threatening to resign if he does take over from Theresa May, will he manage to hang onto the job he so covets if he does get it?

The timing is certainly interesting – the results of the vote will be announced on the same day as the Sun ingresses into Leo, the sign of the ruler or charismatic leader. And just before a Mars-Jupiter trine in fire signs. However, it is also just after a very intense and revealing Venus-Pluto opposition, under which several ministers have either resigned, or have threatened to resign or take legal action, if Boris does become PM or tries to prorogue Parliament. And let’s not forget that Mercury is retrograde, which means people could decide to change their minds…

Rather like Donald Trump, Boris Johnson is a bit of a colourful character with a very colourful past. Known for his classical jokes, messy hair and clown-like disposition, he made a fun and approachable Mayor of London. However, no make no mistake, he is no fool or bumbling idiot, as anyone who has ever clashed swords with him has found out. The Mars T-square in his natal chart shows that under the harmless exterior is a killer instinct and a fiercely determined competitor, as David Cameron found out, to his cost….

Tipped to become the next Prime Minister of the United Kingdom at a moment in history when the stakes – both for British democracy, and it’s place in the world, couldn’t be higher. As one commentator at Sky news put it, whoever becomes prime minister now not only faces having to lead with a minority government, but:

They must make the toughest political decisions since the Second World War, with national debt at levels not seen since the 1960s, urgent policy challenges in almost every brief and with 100 days until Britain is due to leave the European Union without a clear plan.

Never has there been a greater need for a worldclass statesman like Nelson Mandela. But is he up to the job? Or will his canny and determined competitor, Jeremy Hunt (a Scorpio) end up pipping him at the post?

What do the Stars Say?

Let’s have a quick look at the transits to both his and Jeremy Hunt’s charts based on two key moments – the close of the vote at 5pm on 22 Jul, and the announcement tomorrow morning at around 11:30am.

So the first thing to say is that the Ascendant of the Results announcement and that of Boris are virtually identical, which looks good for him.  The second thing I notice is his packed 10th house of careeer – tons of planets are crowding in there, including the Sun, newly ingressed into Leo, sign of the crown, as well as his chart ruler, Venus, one of the benefics. Another promising omen for Boris as far as getting the ‘top job’ is concerned.

The Moon, ruler of his Midheaven, is also on the Descendant, suggesting popularity with others. We also can see his natal Jupiter making a mystic rectangle to Saturn, Neptune and the Midheaven, although these are in private houses. Jupiter is also in positive aspect with the north node, which is smack bang right on the Midheaven – a sign of Fate at work in guiding his career at this point. The positive Saturn aspects suggest being favoured by the old guard (Saturn) within the Tory party.

Add to that a kite formation, centred on his Midheaven (career/success/prominence) which is making positive aspects to Saturn and Pluto, taking in Boris’ natal Neptune, transiting Neptune (6th house of work) and Chiron. This certainly looks very promisig for someone wanting to advance in terms of their career.

The only real downers for him are the square between his Scorpio Moon and the Sun in the 10th – not a great sign as the Moon rules his Midheaven. Could he be about to have more women trouble? Given his track record of scandals involving affairs and that domestic scuffle a few weeks back, it is possible that something could emerge to tarnish his image.

Then there is the square between transiting Neptune to Boris’ Mercury in the 9th house which take sin his Chiron. Everyone says he flip-flops when it comes to his ideals and beliefs, and this could well prove to be a weak point at this time.

In addition, we shouldn’t discount that T-square involving Mars in Leo, which squares Boris’ natal Jupiter in the 8th and his Neptune in Scorpio in the 2nd. Could there be financial problems or health issues lurking in the shadows that could come and bite him now?

Mars rules his 7th house of marriage, partnerships and sworn enemies. It is also on the cusp of the 10th and 11th houses, so this could simply be his political opponents already announcing their intention to do everything they can to thwart his plans if he tries anything ‘fast and loose’, which slippery Neptune is want to do. And let’s face it, Boris has three planets in Gemini (the sign of the fast-talking car salesman) along with the Moon in Scorpio – so we should believe those who say that you can’t trust this guy as far as you can throw him…On this score I don’t think he should under-estimate the strength of feeling amongst his opponents – they really do mean business!

Jeremy Hunt – The Hare and the Tortoise?

So, Jeremy Hunt – we don’t have a time of birth for him, but this chart seems to resonate quite well. However, we can’t be sure of house cusps – something to bear in mind when trying to pinpoint where transits will happen.

At any rate,  Jeremy also has quite a favourable double set of trines and sextiles happeneing between both his natal and transiting nodes, which takes in Saturn, Pluto and Venus-Mercury, all of which are in angular parts of his chart (although we can’t be sure about this because of a lack of birth time). So very strong placings and more than a whiff of destiny about his chart too…The presence of Saturn and Pluto in his first house add gravitas, suggesting he is the candidate with more substance. Add to that the trine between Hunt’s Uranus-Pluto conjunction in details-oriented Virgo and the Saturn-Node-Pluto conjunction, and the suggestion is that Hunt may surprise others – that he shouldn’t be under-estimated.

The Sun is in his 7th house, conjunct his natal Jupiter  – another sign that he is well-liked and respected by his peers and close associates. Interesingly, that same Mars in Leo which looked menacing for Boris Johnson, here looks very positive. It is trine Hunt’s Part of Fortune (7th), suggesting he has the backing of those rebels ministers making waves for Boris. This takes in the Moon and transiting Moon in a positive set of aspects, suggesting that if there was a general election, Hunt would fare better with women voters and the general public.

However, he also has some negatives going on – Jupiter opposite his Moon, suggesting he is not the ‘sexy’/popular choice as far as his party is concerned. Add to that the oppositions between natal Venus-transiting Uranus, and Neptune to Pluto, and there is quite a lot of tension/conflict in Hunt’s chart that isn’t easily resolved. One gets the feeling that, underneath the mild-mannered exterior, he is quite exacting and demanding, if a little intense and uptight.

Well, it’s hard to look at Boris Johnson’s chart and not failt o be impressed by the number of positive transits involving his Midheaven. This certainly reflects the fact that he is the favourite to win, and to me it looks as though he will be crowned prince of the Tories tomorrow. However,  I am not sure how long he will manage to hold down the post, given his flaky Neptune in the 6th and flip-flopping Gemini stellium. And then there’s that Mars, which looks as though a few chickens may come home to roost in the form of a few people with some scores to settle. There’s definitely a whiff of Julius Ceasar about Boris Johnson, and we all know how he ended up….

As for Jeremy Hunt, I don’t see him as the most popular candidate – not based on his transits. However, it’s clear that he does have the support of loyal followers and is more principled than Boris, so I think it will be a close-run race – not as straightforward as people may think… I do wonder if the transits to his nodes point to his ascendancy further down the line, perhaps when Boris screws up or fails to deliver on his promises? There’s a definitely a sense of him quiet solidity about him (Saturn?). And we shouldn’t forget that, in Human Design terms, he is a Manifestor. Boris, as it turns out, is a Projector like Nick Clegg…

With Mercury retrograde, I suspect things won’t go as straightforwardly as Boris and his supporters might like. I smell more Parliament shenenigans ahead!